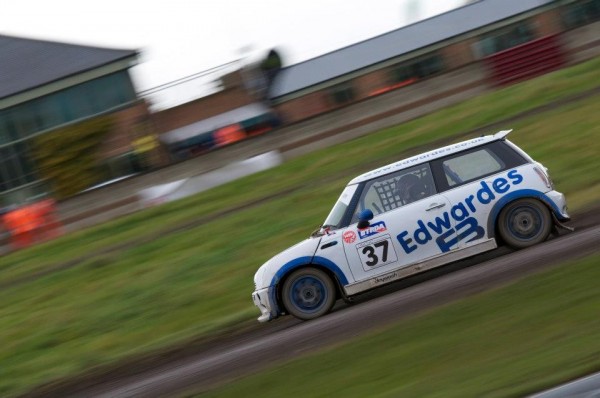 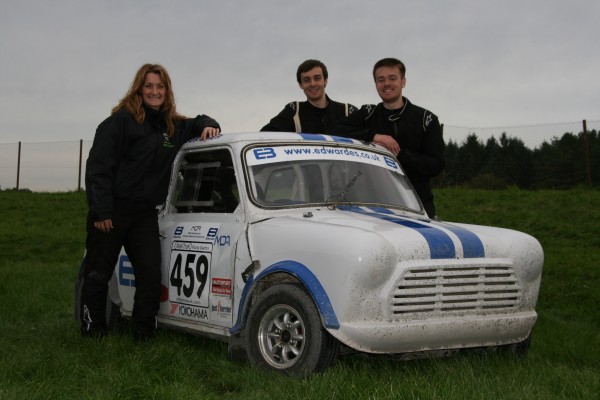 Tom & George head south to Wales for round 5 of the British & Clubman Rallycross Championship. The two brother’s will be joined by Mark Day in his second race with the team. Revivals motorsport will be out in full force. Paul,Richard & Shelley with the debut of the new Honda after her roll at Lydden hill .

Edwardes Racing Team is running a competition to allow a select number of guest to join them on September 7th for a days testing with the team. To have a chance of wining this prize all you need to do is follow the instructions on the poster below 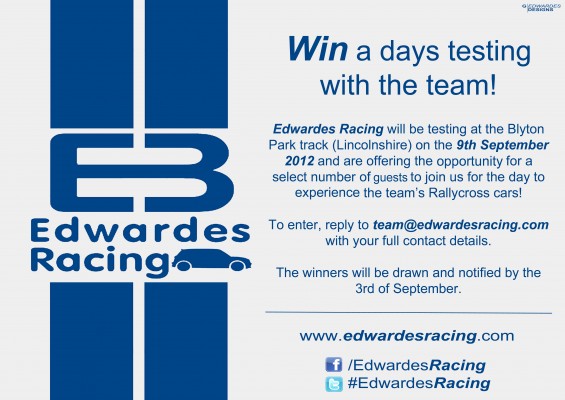 August 19, 2012 Racing Comments Off on Bank Holiday Weekend Mayhem in store for Rnd 4

Round 4 of the MSA Monster Energy British Rallycross Championship heads to the teams home track of Lydden Hill circuit in Kent per the weekend of the 26th/27th of August. Edwardes Racing Team will be fielding just George’s BMW Mini at the event (not being part of Thomas’ clubmans Mini-Cross championship), which will also be running under the name of the ‘Mayhem – Action Sports Event’.

The August Bank-Holiday classic will not only be featuring Rnd 4 of the British Rallycross championship but also showcase other ‘Extreme Action Sports’. These including on track demonstrations by international Drift stars, FMX and BMX riders, attracting some of the top  names from their respective disciplines, in what will be a great weekends family entertainment. 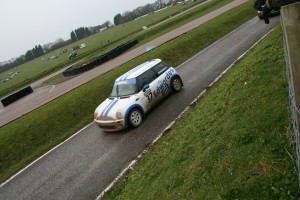 George will once again be racing in the British Rallycross BMW Mini class, with the aim of consolidating his 2nd place in the championship and closing in on title rival Kris Hudson. The Kent track is one of George’s favourites, having secured 2 overall victories and many podium finishes. Continuing on from George’s strong showing at Rnd 3 of the Championship at Mallory Park, a overall event win is certainly a possiblity and the teams main aim for the weekend.

On track action is split over the two days with racing set to commence on Sunday afternoon, with the finals to be held on Monday. For more information and directions head to http://www.lyddenhill.co.uk/.

Strong result for the team in Rnd 3 at Mallory Park!

July 27, 2012 Racing Comments Off on Strong result for the team in Rnd 3 at Mallory Park!

Edwardes Racing Team scored another strong result in Round 3 of the British Rallycross Championship held at the Mallory Park circuit in Leicestershire. Both Tom and George finished 2nd in their respective classes after a fast and exciting days racing. The British summer finally made a presence with the team enjoying a very hot days racing with both drivers completing the day without any issues. 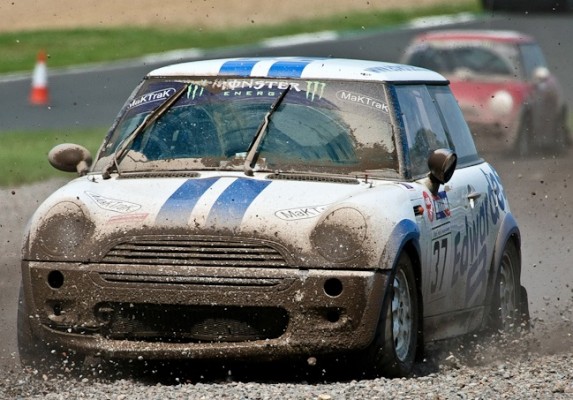 After a difficult start in the first heat, George would finish his race in 4th behind a strong field of competitors on the rough Mallory track. However, George showed his potential speed positing the fastest lap time of 58.599, 0.200 faster than anyone else. Heat 2 saw George finish in 3rd position with once again a strong performance. Although only finishing in 2nd position, Heat 3 saw George’s true speed come to fruition as he chased down leader Kris Hudson after a first corner squeeze that saw the Edwardes Racing driver drop to fifth. Passing three cars on the second lap, George would go onto close on the leader with once again positing a lap time a second faster than anyone else. George started the A final on the outside of the front row and after a strong race where he once again chased the leader Kris Hudson down to the final lap, finishing 0.300 behind after a chaotic race. George would end the day with a solid 2nd position with his strongest performance yet in the BMW Mini class. This result moved George up to 2nd in the British BMW Mini championship standings. 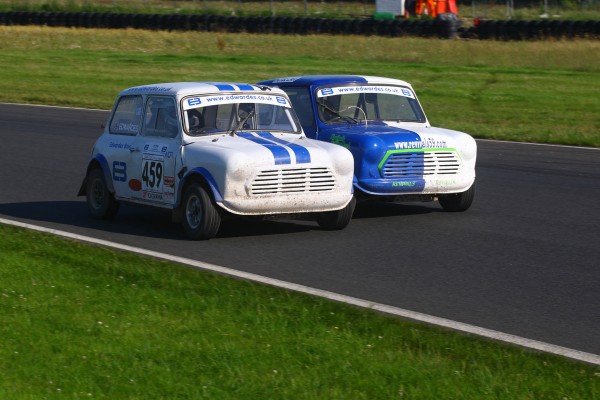 Tom had an equally strong day with two heat wins in the 2nd and 3rd heats allowing him to take up the pole position slot in the A Final, alongside his great rival and team engineer Richard Wakeling. After a great start, the two top drivers ran side-by-side through the long first corner. It was however Wakeling who managed to squeeze his Classic Mini down the inside of Tom through the tight and twisty first sector leading onto the back loose.From then onwards it was down to Edwardes to chase down the leader whilst defending from a resurgent Mark Griffin. Tom would end up finishing 2nd to Richard, 0.300 of a second behind the winner, a feat more impressive considering that Tom drove the last 3 laps in fourth gear after a clutch failure which in most circumstances would have caused the cars retirement. Tom still retains 2nd position in the Mini-Cross championship as they head into the final few rounds.

Mark Day, Edwardes Racing’s 3rd driver for the weekend finished his first Rallycross event with a strong 4th position in the Mini-Cross class, quickly getting to grips with the unique characteristics of classic Mini. It is yet to be confirmed whether Mark will drive the car in the remainder of the 2012 championship.

The team now has a short break before heading out to the August Bank Holiday classic for Rnd 4 of the British Championship at Lydden Hill in Kent on the 26th/27th of August. Although being the teams home event, only George will be racing at this event in his BMW Mini as the event is not part of the Mini-Cross championship.

Make sure to regularly check the teams website, Facebook and twitter to find all the latest news and information on the teams activities throughout the year!

July 2, 2012 Racing Comments Off on New driver announced to team for Mallory Park

We are please to announce a new member to the team .
Mark Day will be racing 432 in his inaugural rallycross race at Mallory Park on the 22nd July 2012.
We will be entering two classic in the MDA/BTRDA Clubman’s Championship, 459 Tom & 432 Mark.
George will be competing in car 37 the BMW Mini in the British Championship.